Supreme Court limits use of civil forfeiture by states

The Supreme Court unanimously decided to limit how states such as South Carolina use civil forfeiture.

The ruling should have an immediate effect on law enforcement’s use of civil forfeiture in South Carolina, said Deborah Barbier, an attorney in Columbia who specializes in civil forfeiture cases.

“Forfeiture is an incredibly powerful law enforcement tool. It must be used reasonably,” she said. “This case demonstrates that when law enforcement tries to overreach – the courts have the power to stop those abuses.”

She called it a victory for the civil liberties of all Americans to be free from grossly disproportionate seizures of their personal property by law enforcement.

After Quinn’s probation, dismay, joy and wondering: What’s next?

Former state Rep. Rick Quinn — whom a prosecutor dubbed the “worst of the worst” in the Legislature — was sentenced Monday to probation and community service, and the political strategy firm run by his GOP kingmaker father, Richard Quinn, was fined $2,500.

Probation? A $2,500 fine? After the State Grand Jury last fall indicted the Quinns on charges of illegal influence-peddling in the General Assembly, alleging they made millions by bribing legislators to do the bidding of South Carolina’s business elite?

Meanwhile, state Rep. Rick Quinn, R-Lexington, secretly was paid by his father to help in the scheme, pushing that legislation through the Legislature, Pascoe alleged, calling the younger Quinn, 52, the “worst of the worst” in the General Assembly.

It was a stunning indictment of S.C. politics.

After resigning from office and pleading guilty to a single misdemeanor, Rick Quinn was sentenced to two years’ probation, 250 hours of community service and fined $1,000.

His father’s firm — the heart of “The Quinndom’s” legendary political power — was fined $2,500.

Afterward, Richard Quinn’s lawyer said the December plea deal, which dropped all criminal charges against the political consultant, “speaks volumes about the validity of this investigation.”

“I never used my office for personal gain. Those were all lies by Mr. Pascoe,” he told reporters.

Or — as the Quinns insisted afterward — was there never anything there?

Questions about Pascoe’s prosecution center on why he agreed to a mid-December plea deal that dismissed all charges against Richard Quinn on the condition that his firm, Richard Quinn & Associates, pay a $2,500 fine and he testify before the State Grand Jury.

Questions about Mullen include why she repeatedly stopped Pascoe from speaking during Monday’s eight-minute sentencing hearing as the special prosecutor tried to object to the Quinns’ guilty pleas.

“One of the most important public corruption cases in South Carolina history got wrapped up in an eight-minute hearing without the prosecutor allowed to say what he wanted to say – that’s pretty amazing,” said John Freeman, ethics and business professor emeritus at the University of South Carolina School of Law.

“I wonder if the public interest is well-served by muzzling people who have something to say about public corruption?” Freeman asked.

“One of the most important public corruption cases in South Carolina history got wrapped up in an eight-minute hearing without the prosecutor allowed to say what he wanted to say – that’s pretty amazing. I wonder if the public interest is well-served by muzzling people who have something to say about public corruption?’

– John Freeman, ethics and business professor emeritus at the University of South Carolina School of Law

But Freeman said he has questions, too, about why Pascoe agreed to a deal that was so lenient for two defendants accused of major corruption.

“It’s mysterious,” said Freeman. “If you wanted to see reform and a clean broom sweeping through the General Assembly, Monday was a travesty.”

John Crangle, a lawyer and who has written on legislative ethics issues for years, said Judge Mullen’s muzzling of Pascoe showed a lack of professional courtesy. It also may prevent Pascoe from filing any appeal, he added. Lawyers are supposed to raise objections in open court.

“Judge Mullen ‘did everything but make David Pascoe apologize for causing inconvenience to Rick Quinn and his family.’

Crangle also questioned why Pascoe agreed to a plea bargain that allowed Mullen to give the Quinns such a light sentence.

Pascoe’s go-easy plea deal might be the result of the courtroom equivalent of “combat fatigue,” Crangle speculated.

With the help of a small squad of State Law Enforcement Division agents, Pascoe has been investigating allegations of State House corruption for almost four years. Then, he does his “day job” —prosecuting cases in South Carolina’s 1st Circuit.

During his four years as special prosecutor, Pascoe has won victory after victory against great odds, Crangle said.

He has won guilty pleas from S.C. House Speaker Bobby Harrell, R-Charleston, and former House Majority Leader Jim Merrill, R-Berkeley. He has survived an attempt by Attorney General Alan Wilson to fire him and won the right to activate the State Grand Jury with its powerful subpoena powers. He has indicted the Quinns and others, and fought off numerous attempts by defense attorneys to scuttle or delay his investigation.

Ends in a whimper?

Lynn Teague, a League of Women Voters activist, said a Quinn trial — where evidence was made public — or a better orchestrated guilty plea — where more evidence was put in the record — would have served the public better than what happened Monday.

Pascoe had painted “a very ugly picture of influence peddling by the Quinns,” Teague said. However, Monday’s hearing failed to live up to the picture that the prosecution had painted.

Judge Mullen also “missed an opportunity to send a signal that these things matter,” Teague added.

Others suspect there may be more to come.

Greg Adams, a USC School of Law ethics professor, speculated the now-infamous mid-December plea deal – which requires Richard Quinn to testify before the State Grand Jury – could be part of a grand, nonpublic strategy by Pascoe to go after more targets.

“David’s a really good prosecutor,” Adams said, explaining Pascoe might be using the methods often employed by federal investigators to shake loose “valuable information from the Quinns that leads him to be able to indict and convict other significant players. …

“I will be absolutely flabbergasted if this just ends in a whimper.”

On Friday, Pascoe gave his version of what went wrong, blaming Judge Mullen.

The special prosecutor filed a 13-page motion asking Mullen to reconsider her sentence of probation for Rick Quinn and give the former state representative jail time. In the motion, Pascoe said Mullen had committed fundamental errors of law in her handling of the case — from Quinn’s Dec. 13 guilty plea hearing to last Monday’s sentencing hearing.

‘All lies by Mr. Pascoe’

The Quinns suggest another possibility.

Pascoe never had a case, the relieved defendants and their elated lawyers said Monday.

“I never used my office for personal gain. Those were all lies by Mr. Pascoe,” Rick Quinn told reporters Monday, adding if his case had gone to trial, he would have proved his innocence. The only reason he had entered a guilty plea was that Pascoe had indicted his father and “threatened to indict other family members,” Quinn said.

“‘I never used my office for personal gain. Those were all lies by Mr. Pascoe.’

Debbie Barbier, the lawyer for Richard Quinn, noted Pascoe’s investigation of the Quinns had ended with the dismissal of all charges against her client, “which speaks volumes about the validity of this investigation.”

“This ordeal, which has been a nightmare for the Quinns, is over,” Barbier told reporters.

But the Quinns’ ordeal may not be over.

Suspended state Sen. John Courson, R-Richland, is scheduled to be tried in March. Courson is charged, in part, with taking $132,802 in secret payments from Richard Quinn’s political strategy firm.

Former state Rep. James Harrison, R-Richland, also faces corruption charges. While no trial date has been set for Harrison, he is charged, in part, with secretly collecting more than $900,000 from Richard Quinn’s firm while he was in the Legislature.

Former state Rep. Tracy Edge, R-Horry, also faces charges that he secretly was paid some $290,000 by Quinn’s firm while he was in the Legislature.

Richard Quinn could be put in the uncomfortable position of having to testify against each of his three former Republican allies.

“Put them in the criminal defense lawyers’ Hall of Fame,” USC’s Freeman said. “To take what the prosecution claimed it had and get punishments akin to what you would get if you were a shoplifter at Wal-Mart – that’s amazing defense work.”

Barbier Appointed Special Prosecutor to Former Speaker of the House

“On the recommendation of House Legislative Ethics Committee attorney Deborah Barbier, the group ruled Harrell must repay the $113,475, as well as pay a $1,000 fine. Barbier also recommended the panel publicly reprimand Harrell.”

Q & A Debbie Barbier: After sending criminals to jail, Barbier goes to law’s other side. 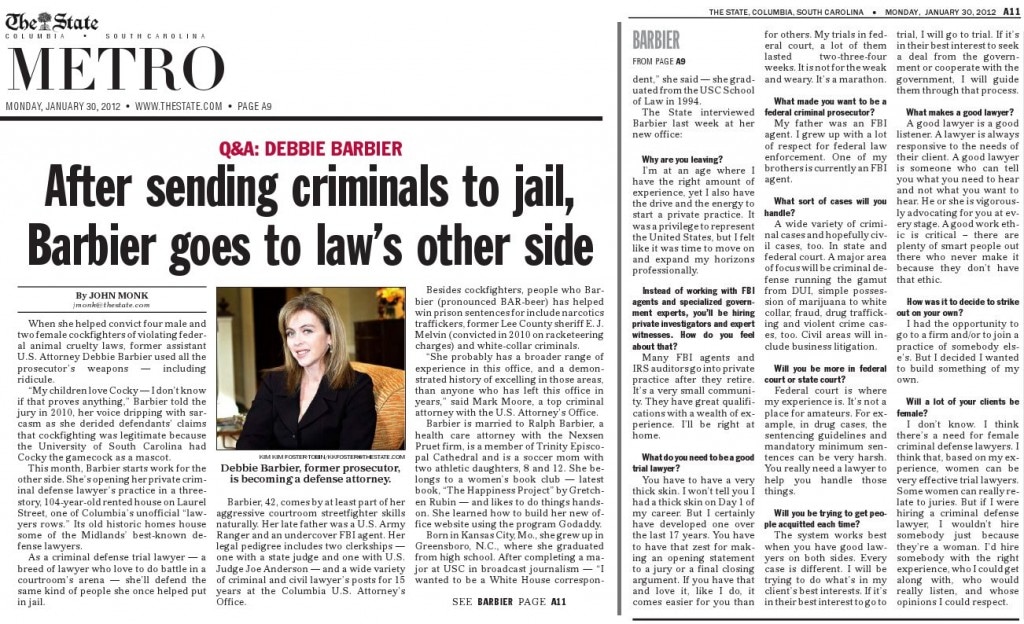 Barbier is featured in the Star Profile of the Columbia Star 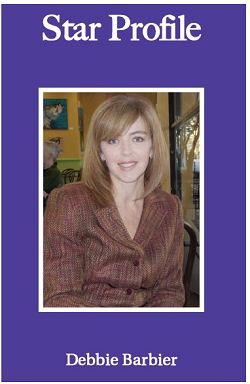 Columbia attorney Debbie Barbier has been with the U. S. Attorney’s Columbia office for 15 years, where she has built an impressive history of courtroom victories on behalf of the American taxpayer. She has forced collections in fines and in restitutions, amounting to millions of dollars. And she has sent to prison criminals for the long haul, thieves who were trying to steal millions of dollars from all levels of government local, state, and federal.

As of the first week in 2012, Barbier will remove herself from the U. S. Attorney’s quarters at 1441 Main Street and relocate on her own to 1531 Laurel Street at the corner with Pickens Street in a historic house for the practice of criminal law.

“He spent a good portion of it at strip clubs and nightclubs throughout the Columbia area,” said Assistant U.S. Attorney Debbie Barbier, adding that Moore let some of the strippers keep all of the money from the checks they cashed. “There were a number of lives ruined because of this case. … It was a very senseless crime.” 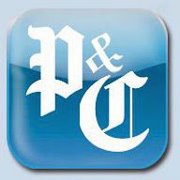 FLORENCE — Prosecutors promised the jury in the trial of a former Lake City police officer Wednesday they would get a glimpse into the drug world of Lake City and how she shielded the corrupt authorities.

Barbier is prosecuting the case with Assistant U.S. Attorney Alfred W. Bethea Jr. of the Florence office before U.S. District Court Judge Terry Wooten. The jury consists of six men and six women, and the trial is expected to last as many as five days.
Read The Entire Story