Deborah Barbier Inducted into the International Academy of Trial Lawyers

Deborah B. Barbier of Deborah B. Barbier. LLC in Columbia, South Carolina was recently inducted into the International Academy of Trial Lawyers (IATL) at their Mid-Year Meeting in Whitefish, MT, held in July 2019.

The International Academy of Trial Lawyers limits membership to 500 Fellows from the United States, and includes Fellows from nearly 40 countries across the globe. The Academy seeks out, identifies, acknowledges and honors those who have achieved a career of excellence through demonstrated skill and ability in jury trials, trials before the court and appellate practice. Members are engaged in civil practice on both the plaintiff’s and the defendant’s side of the courtroom, and the trial of criminal cases. The Academy invites only lawyers who have attained the highest level of advocacy. A comprehensive screening process identifies the most distinguished members of the trial bar by means of both peer and judicial review. Deborah Barbier has been evaluated by her colleagues and the judges in her jurisdiction and has been highly recommended by them as possessing these qualifications and characteristics.

Chartered in 1954, the Academy’s general purposes are to cultivate the science of jurisprudence, promote reforms in the law, facilitate the Administration of Justice, and elevate the standards of integrity, honor and courtesy in the legal profession.

The American Law Institute (ALI) has elected Deborah B. Barbier to bring her expertise to ALI’s work of clarifying the law through Restatements, Principles, and Model Codes.

The American Law Institute is the leading independent organization in the United States producing scholarly work to clarify, modernize, and improve the law. The ALI drafts, discusses, revises, and publishes Restatements of the Law, Model Codes, and Principles of Law that are enormously influential in the courts and legislatures, as well as in legal scholarship and education.

By participating in the Institute’s work, Ms. Barbier will have the opportunity to influence the development of the law in both existing and emerging areas, to work with other eminent lawyers, judges, and academics, to give back to a profession to which she is deeply dedicated, and to contribute to the public good.

“I am delighted to be elected as a member of the American Law Institute to work with this remarkable group of lawyers, academics, and judicial officers,” said Barbier.

According to said ALI President David F. Levi, “[t]he American Law Institute is an active institution that depends on the talent, wisdom, and diverse perspectives of its members for its continued activity and excellence.”

To be considered for selection, an attorney must have litigated (for either plaintiff or defendant) a matter (1) with at least $2,000,000 in alleged damages at stake or (2) with the fate of a business worth at least $2,000,000 at stake. These minimum qualifications are required for initial consideration.  Thereafter, candidates are carefully screened through comprehensive Qualitative Comparative Analysis based on a broad array of criteria, including the candidate’s professional experience, litigation experience, significant case results, representative high stakes matters, peer reputation, and community impact in order to rank the candidates throughout the state.

Only the top 100 qualifying attorneys in each state will receive this honor and be selected for membership among America’s Top 100 High Stakes Litigators®.  With these extremely high standards for selection to America’s Top 100 High Stakes Litigators®, less than one-half percent (0.5%) of active attorneys in the United States will receive this honor — truly the most exclusive and elite level of attorneys in the community.

If you would like more information about America’s Top 100 High Stakes Litigators® or the selection process, please visit our website at www.Top100HighStakesLitigators.com or contact Kevin Wieser – Membership Director at Membership@AmericasTop100Attorneys.com.

Deborah B. Barbier has become a Fellow of the American College of Trial Lawyers, one of the premier legal associations in North America.

The induction ceremony at which Barbier became a Fellow took place recently before an audience of approximately 900 persons during the recent 2015 Annual Meeting of the College in Chicago, Illinois.

Founded in 1950, the College is composed of the best of the trial bar from the United States and Canada. Fellowship in the College is extended by invitation only and only after careful investigation, to those experienced trial lawyers who have mastered the art of advocacy and whose professional careers have been marked by the highest standards of ethical conduct, professionalism, civility and collegiality. Lawyers must have a minimum of fifteen years trial experience before they can be considered for Fellowship.

Membership in the College cannot exceed one percent of the total lawyer population of any state or province. There are currently approximately 5860 members in the United States and Canada, including active Fellows, Emeritus Fellows, Judicial Fellows (those who ascended to the bench after their induction) and Honorary Fellows. The College strives to improve and elevate the standards of trial practice, the administration of justice and the ethics of the trial profession. Qualified lawyers are called to Fellowship in the College from all branches of trial practice. They are carefully selected from among those who customarily represent plaintiffs in civil cases and those who customarily represent defendants, those who prosecute individuals accused of crime and those who defend them. The College is thus able to speak with a balanced voice on important issues affecting the legal profession and the administration of justice.

Barbier is a sole practitioner who has been practicing throughout South Carolina for twenty-one (21) years. She is a former federal prosecutor and former head of the White Collar Crime division in the United States Attorney’s Office in the District of South Carolina. Barbier is a 2012 recipient of the Compleat Lawyer Award, which is one of the most prestigious awards that a USC law graduate can receive. Barbier has been selected for the past three years to be included in the Best Lawyers in America for her work in two areas – White Collar Criminal Defense and General Criminal Defense. The newly inducted Fellow is an alumna of the University of South Carolina School of Law.

Barbier To Be Included in The Best Lawyers In America, 19th Ed.

Barbier is awarded Compleat Lawyer of the year award for 2012

Established in 1992, the Compleat Lawyer Award is the School of Law’s highest recognition of professional achievement and civic leadership by the school’s alumni.

USC Law Dean Robert Wilcox says because the award recipients are nominated by other lawyers and selected by a panel of leaders from the state court and state bar, the Compleat Lawyer Award is considered one of the most prestigious awards that any graduate can receive. 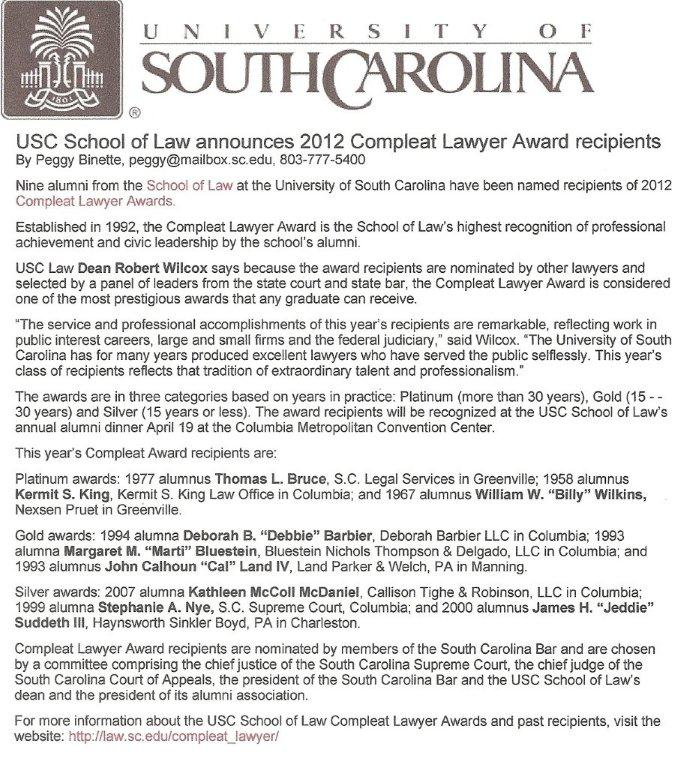